The small European country of Croatia is famous for its football players, sea and nature. Since we are adventure travelers, you know what we are going to discuss today. The most attractive thing in the eyes of the fellow adventurers – the nature of Croatia.

And the nature of Croatia, together with a crystal clear Adriatic sea, is one thing that attracts more and more tourists with each passing year. Yes, Croatia is rather a small country, but nature chose to show many of its faces right here, on this small part of the land and the sea.

introduction to nature of croatia

To understand the stunning diversity of natural landscapes of Croatia, we’ll simplify things as much as we can and divide Croatia into few regions which share similar natural characteristics. For that, we’re going to have the following regions: Dalmatia, Lika and Gorski Kotar, Slavonia, Istria and Zagorje, and Northern Croatia. Each of the following regions will be further explained in this article.

Let’s talk about the nature of Croatia in short terms so you know what to expect when you come here. First of all, Croatia has a long coastline and more than 1000 islands that stretch along with it. The Croatian part of the Adriatic sea is one of the main reasons tourists visit this country.

Few mountains stretch along the shore too, Biokovo and Velebit being the largest and most famous of these. Lika and Gorski Kotar are mountainous regions of Croatia while Slavonia is flatland full of fields that feed Croatia. Zagorje and Northern Croatia are regions of rolling hills, castles, and legends. Finally, Istria is the largest peninsula in Croatia and it’s famous for its vineyards and beautiful, intact nature.

Also, we can’t write an article about the nature of Croatia without mentioning its 8 amazing national parks. Once again, they are diverse as the rest of the Croatian nature and they are situated in Dalmatia, Lika and Gorski Kotar, and Istria regions. We wrote about them already so check that post and decide which one to visit when you come to Croatia.

Istria is the largest Croatian peninsula, situated in the northwest of Croatia. Observing the borders of Croatia, a lot of people recognize the shape of the dragon or a bird. Well, in that case, Istria would be a dragon’s head.

Brijuni national park is located on the western shores of Istria. When it comes to nature, smaller hills full of vineyards dominate across this peninsula. Istria is very famous for its wines, especially the Teran sort. 2 rivers are flowing through the landscape of the Istrian peninsula – Dragonja and Mirna. Along their way toward the Adriatic sea, both of these made unique and peculiar landscapes to explore and enjoy.

Lika and Gorski Kotar are mountainous regions of Croatia and they have continental climates. That means that winters can be very harsh and with a lot of snowfall. Which, on the other hand, makes them worth visiting even during the winter months, when the rest of Croatia is ‘sleeping’.

Velebit mountain is the largest and most prominent mountain of this region and it also divides Lika and Gorski Kotar from the Adriatic sea. Plitvice lakes, one of the most famous national parks in Croatia, is situated in this region. Gorski Kotar is full of dense forests and it’s often called the ‘lungs of Croatia’.

Apart from Plitvice lakes, there are many other stunning creations of nature left to explore for all types of adventurers and wanderers. Bible and Samarske stijene, Kamačnik and Vrazji prolaz canyons, Risnjak national park are just some of them. Finally, this region is a must-visit if you are a hiker because some of the best hiking trails in Croatia are just here.

Slavonia is a lowland part of Croatia and its most eastern part. It’s full of fields that make some of the most amazing patterns when observed from the air. This Croatian region has the most developed agriculture and grows many different kinds of crops. It can feed the whole of Croatia.

As we already mentioned, vast fields are dominant in Slavonia and there are almost no hills in its territory, except the Papuk and Krndija. Few rivers flow through the territory of Slavonia. It’s important to mention that this whole region was once under the Pannonian sea.

We have included Zagreb, the capital of Croatia, and its surroundings in this region along with the Zagorje region itself. This part is sometimes called central Croatia in some cases. It’s a region full of rolling hills and castles. Western European influence during medieval times is very evident.

Similar to Istria regions, the slopes of the Zagorje hills are full of vineyards. Medvednica is a mountain that separates Zagorje from Zagreb and it’s also a protected nature park. If you are a skiing fan, you might want to know that Medvednica hosts few skiing events during the winter and you have a chance to go skiing there.

We have left the region we live in for the end of this article. The best things come last. Dalmatia is one of the most famous and most popular regions of Croatia. It’s shaped by the Adriatic sea and mighty mountains such as the Biokovo mountain. It’s a unique blend of mountains and the sea.

Dalmatia has the best when it comes to the nature of Croatia. A larger portion of the Croatian part of the Adriatic sea is in Dalmatia. This region is full of islands of various sizes and each island has its own natural peculiarities.

Out of 8 national parks in Croatia, 4 of them are situated in Dalmatia. Mediterranean vegetation is dominant and the climate is nice and warm, except high in the mountains. Even the highest mountain in Croatia – Dinara, is situated inland of Dalmatia. It’s a region we explore a lot because we live in it. And there is always something left to explore.

Many rivers are flowing through Dalmatia with Krka, Cetina, Zrmanja, and Neretva being some of the most famous ones. Many tourists come to Dalmatia because of the sea but fall in love with it because of its nature.

Finally, we run all of our adventure tours in Croatia right here in Dalmatia, in the best that nature of Croatia has to offer. We need to mention beautiful Bacina lakes that are situated near the city of Ploce in southern Dalmatia. 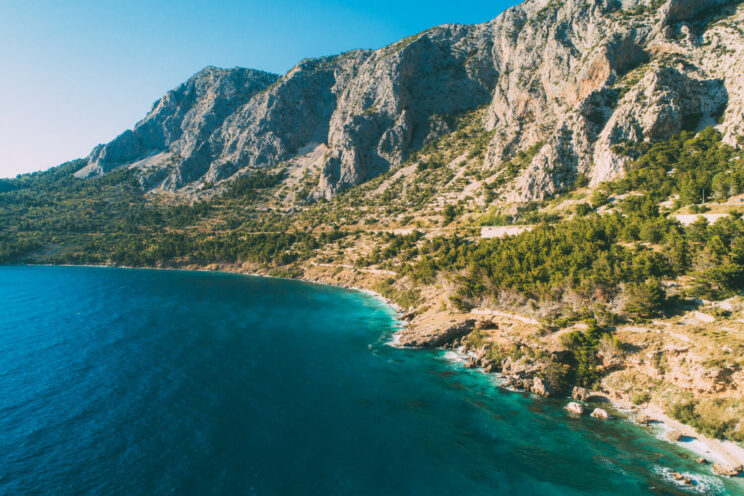 The best outdoor places to visit in Dalmatia in 2021

Is Makarska worth visiting in 2021?